THE ALL, THE ONE THING
(AETHER)

All life is the manifestation of the aether itself (what Hermeticists call the ALL, or ‘The One Thing’). From the aether comes forth light (as amplitude) which manifests itself conspicuously under the proper circumstances, but under others remains a mystery barely manifesting its power. To perform The One Work through its operations of Separation, Purification, and Cohobation - is to manifest without, or to give birth to, that which lies concealed within The One Thing itself; higher orders of energetics.

Through proportion, distribution and quantity, innumerable manifestations appear within the alchemists vessels, to reveal that the essence of this aetheric medium is made manifest as an orderly, intelligent energy. This energy can be either infused into an elixir, for example, or it can be focused, and made to transmute other matter in forms receptive to its organized energetic structure.

Like sound, the energetics of this One Thing (aether) manifests itself through The Earth and its myriad forms are as its Echo. The Mediator of this ‘sound’ is The Intelligence. The Intelligence lies both within man, and without. When the alchemist forms a conscious union with The Intelligence's Light - a pure, conscious energy - it moves from its temporary home, often referred to symbolically as a womb, or darkness (as in the vacuum of space), from this state to the womb, giving birth to all that is.

Thus it was said that “The Mediator, The Divine Intelligence, through Its Revelator, The Light, from out of Its Darkness, brings forth Below The Revelation of The Reality Above.” 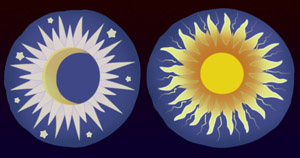 “In the center of Light and Darkness it is. Between Heaven and Earth it is. In the midst of The Earth, existing as an intermediary between the kingdoms above it and the kingdoms below it, it is. It is that which is called Self-Consciousness, an intelligent awareness of self and the world of self. Upon the Human Kingdom it has been bestowed. Through its mediating influence, this intelligence has brought forth the grandeur and wonder of ages past and present. In impure, ignorant, and delusive surroundings, it has brought forth destruction and suffering for all upon the earth.”

“The Mediating Intelligence of the Human Kingdom is privileged to consciously assist in The Great Work of The One Life - to reveal the joyous Truth of The Living Reality. Yet this mediating intelligence has much work to do before there comes forth through its operation of cohobation the manifestation of that which is truly representative of The Truth.”

This phenomena of two sources of light, one subtle and dark, and one manifest as light, is sometimes referred to in esoteric terms as the existence of Two Suns. Althougth I usually shy away from the Jungian (new age) interpretations of Alchemy, in this case a metaphysical interpretation is desirable. Mankind's very soul is a mediator of this light, and this mind-body complex becomes a vessel for an inner process of spiritual cohobation. In the beautiful illustration below we see one artists interpretation of the Great Work of Creation as a manifestation of these synergistic principles reflected up through the darkness of the void, through into consciousness and Creation itself.